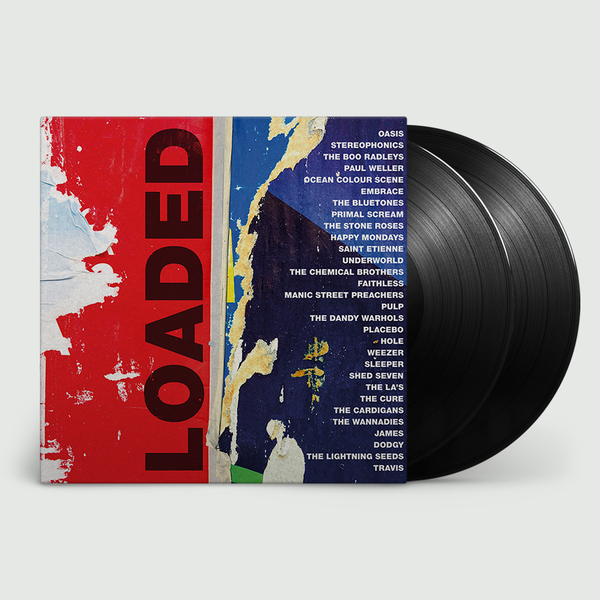 Exclusively on vinyl - 30 incredible tracks that defined an era of music.

In the early ’90’s Indie and Dance music came together to produce some of the most incredible & genre-challenging hits ever. Defining tracks from Primal Scream, The Stone Roses, Happy Mondays and Saint Etienne are featured. Club hits became anthems for a generation with Faithless, The Chemical Brothers as well as the incredible ‘Born Slippy’ from Underworld (from the film ’Trainspotting’) are all also included.

By the mid ’90’s ‘Brit-pop’ had become a cultural movement with both the music and the fashion it inspired, its driving force were legendary artists with defining tracks on ‘Loaded’ such as Pulp, Embrace, The Bluetones, Ocean Colour Scene, Stereophonics and the most successful band of the era, Oasis, opening this collection with ‘Don’t Look Back In Anger’.

Established acts released some of their most beloved tracks during this period including Paul Weller with ’The Changingman’ and Manic Street Preachers with ‘A Design For Life’, The Cure with ‘Friday I’m In Love’ and The Lightning Seeds with ‘Lucky You'.

The era also produced some amazing indie pop tunes that sound just as fresh today from The Boo Radleys, James, Dodgy, Travis, The Dandy Warhols, The Wannadies, Sleeper, The Cardigans, Shed 7, Placebo and the timeless ‘There She Goes’ by The La’s all of which are featured alongside the US Indie pop of Weezer and Hole.

30 iconic artists with 30 amazing songs - ‘Loaded’ is an essential addition to any good record collection - and the perfect gift for Father’s Day.