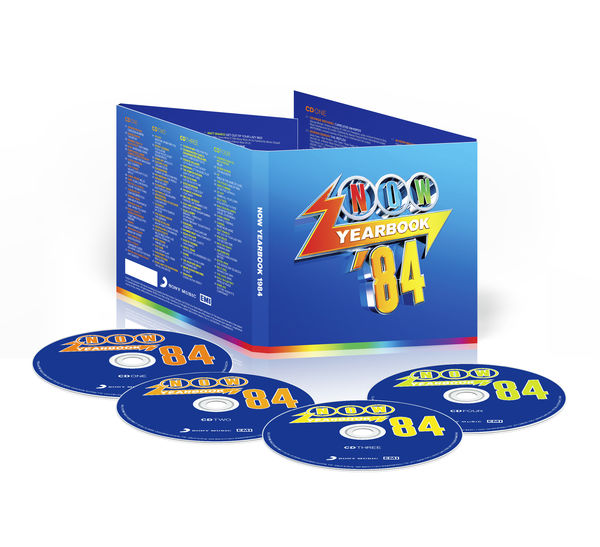 NOW Music is proud to present the continuation to our Yearbook series, NOW - YEARBOOK 1984; a 4CD compilation featuring 78 defining hits that ruled the charts in 1984, including No.1s from Lionel Richie, Chaka Khan, Duran Duran, Frankie Goes To Hollywood and George Michael (solo and with Wham!), together with huge hits from Culture Club, Bananarama, U2, Spandau Ballet, and Deniece Williams.

1984 marks one of the most iconic and successful years for singles – with the decade’s four biggest sellers all released this year. NOW - YEARBOOK 1984 reflects this amazing year with synth-pop classics such as ‘Here Comes The Rain Again’, ‘Self Control’, ‘Together In Electric Dreams’, and ‘Never Ending Story’. Celebrate the success of electro, Hi-NRG and rap becoming vital ingredients in dance-pop, with ‘I Feel For You’ by Chaka Khan, ‘Let The Music Play’ by Shannon, ‘Jump (For My Love)’ by The Pointer Sisters, ‘Somebody’s Watching Me’ by Rockwell, and ‘You Think You’re A Man’ by the sensational Divine, plus the defining ‘White Lines’ from Grandmaster Flash & Grandmaster Melle-Mel leading the way. 1984 saw the emergence of a huge number of new artists hitting the charts, including Sade, Alison Moyet, Dead Or Alive, Nik Kershaw and Bronski Beat. Plus, established greats continued from strength to strength, including Elton John, The Police, Billy Joel, Tina Turner and Paul McCartney. The album concludes, as the year did, with Band Aid’s ‘Do They Know It’s Christmas?’, to that point, the UK’s biggest selling single ever.

Take a trip back to one of the greatest years of pop music ever.

A must-have compilation for every lover of pop music.